Uruguay is a small country in South America. It lies between Argentina and Brazil, and has some interesting places to visit. This site contains photos from this beautiful country and its inhabitants. 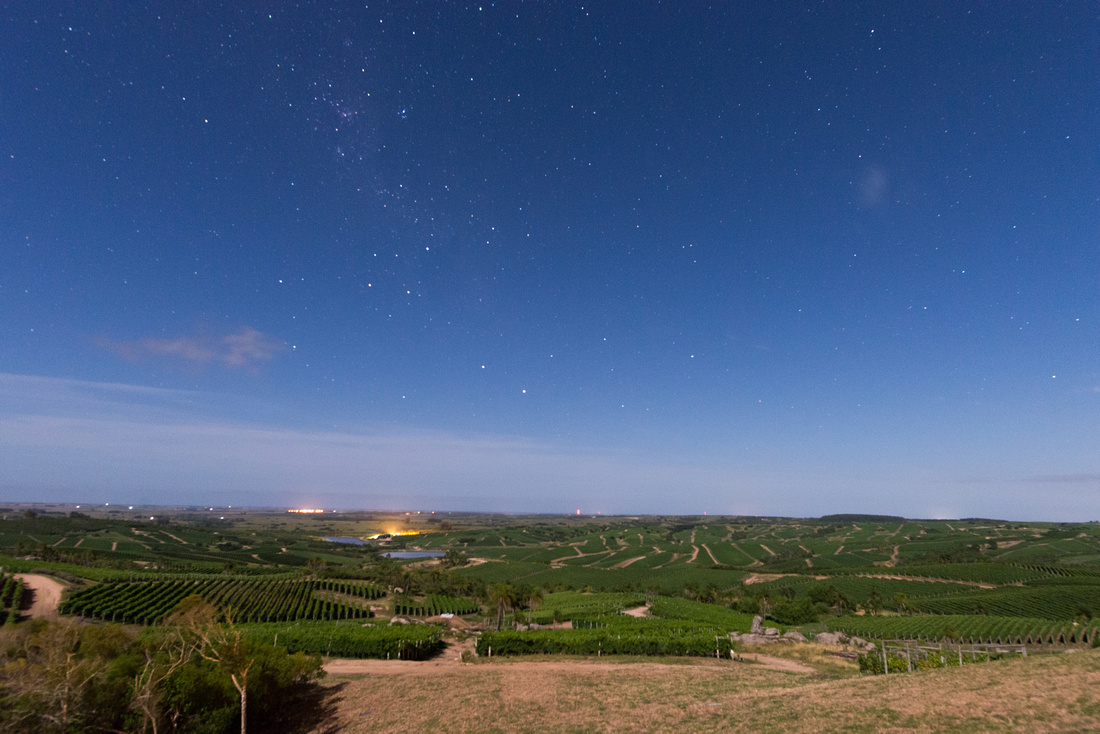 MoonlitThe vineyards of Bodega Garzón extend into the distance illuminated by the moon.

If you would be cruising the highways of Uruguay, you would not know it exists. However, hidden inside the hills around Pueblo Garzón at about one-and-a-half hour driving from Punta del Este of which about 30 minutes will be spent on dirt roads that zigzag through the countryside, lies a beautiful and exclusive restaurant located in the middle of Bodega Garzón. 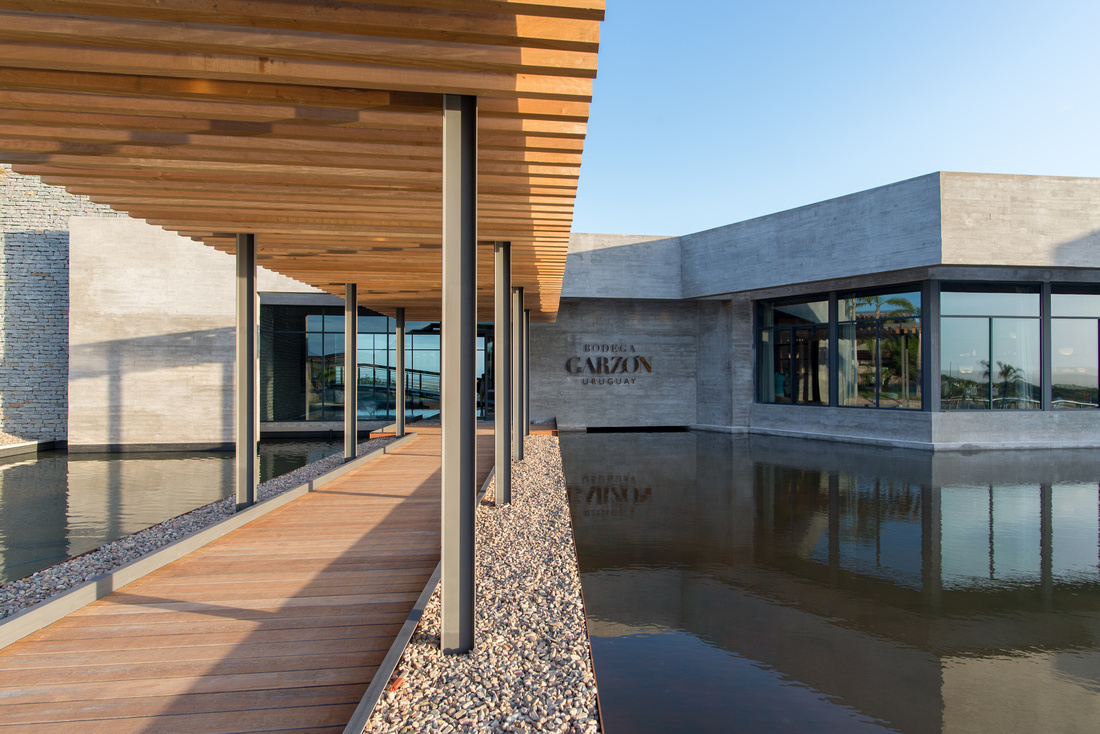 The New York Times placed the vineyard Bodega Garzón on the 22nd position of a list of 52 places to visit in 2016. It's an incredible place indeed. Luxurious, beautifully designed and with beautiful views that extend kilometers into the distance, overlooking the vines. One can only guess at the amount of effort and funds that have been poured into this place, but it must have be mind-blowing. 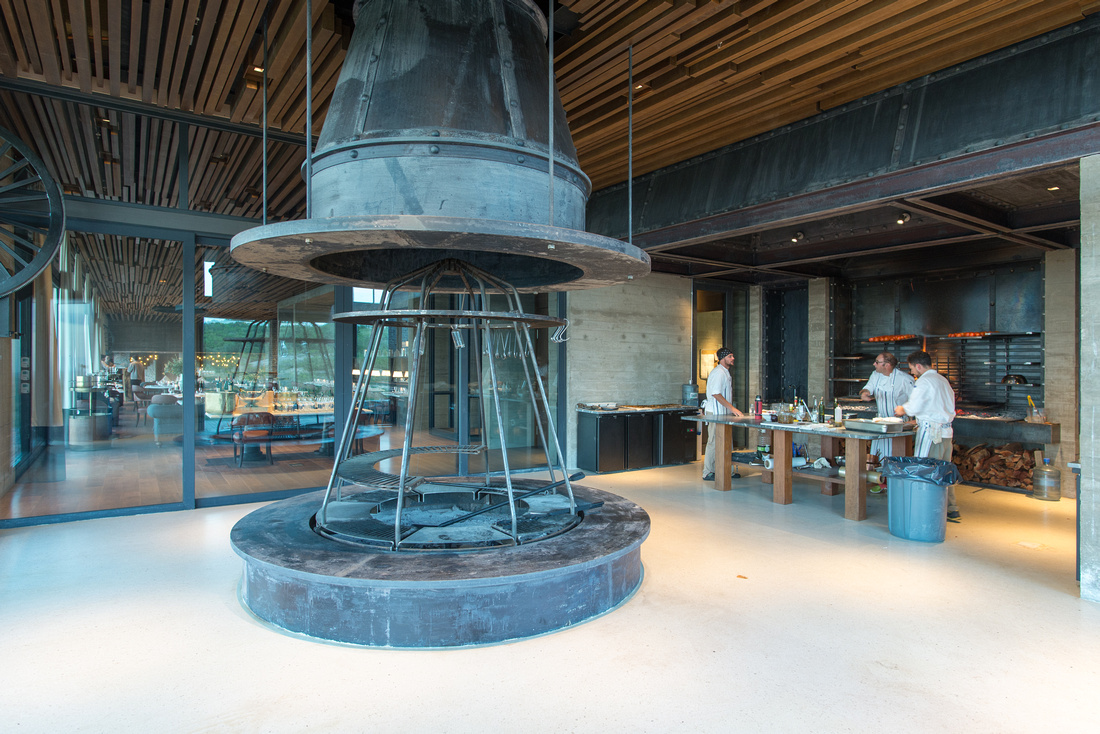 The kitchen is being supervised by the Argentinian chef Francis Mallmann, and our experience there was as fantastic as his name promised it would be. The kitchen is beautifully designed with a big fireplace to roast meat on, and can be seen through the glass walls that separate it from the restaurant. We enjoyed what was labeled as a "Sunset Wine Dinner" there, with excellent courses accompanied by the different wines the vineyard has to offer.

Although at the time of this writing the vineyard has not been officially opened to the public all year round, the restaurant can be visited already. I would suggest making a reservation first; it's a bit too far away to risk ending up before closed doors. You can contact Bodega Garzón via their website. 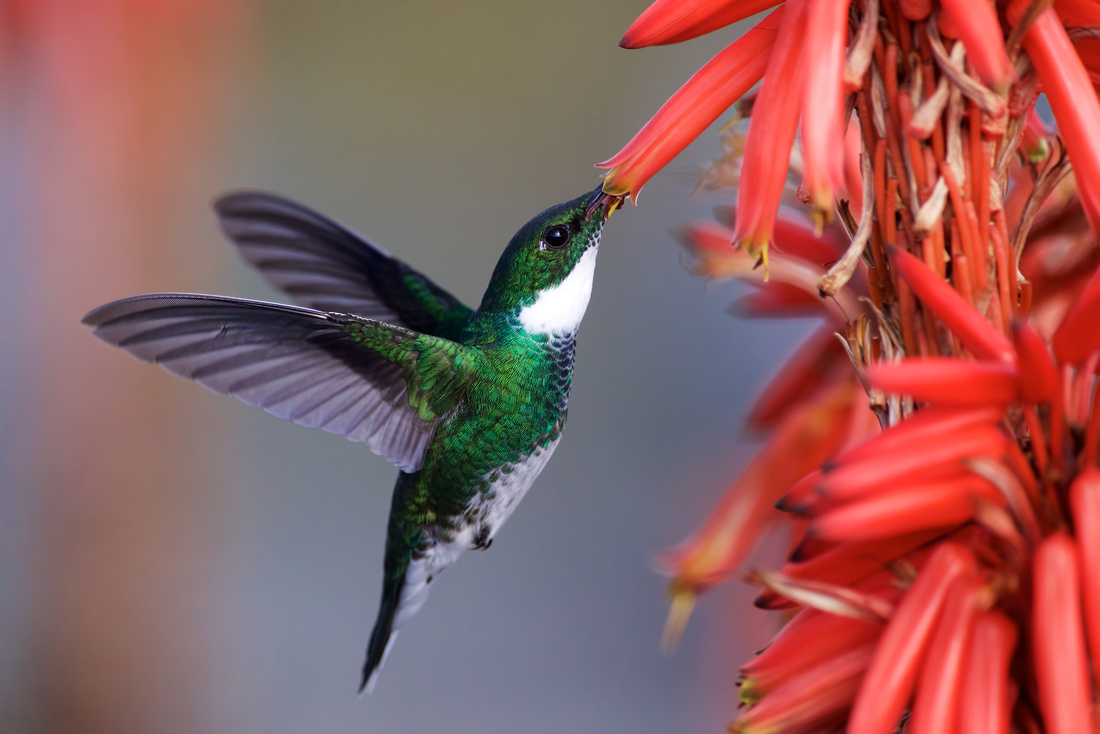 As might be clear from the amount of photos of that specific subject I take, I like birds. And sometimes, when I research the backgrounds of birds, I become more interested than other times. So I thought, why not share? Take the case of the white-throated hummingbird (Leucochloris albicollis). This species is one of the two species of hummingbird that can be found all-year round in Uruguay, the other species being the Gilded hummingbird (Hylocharis chrysura). Like all hummingbirds, this is a small bird that hovers in front of flowers to drink their nectar. In Uruguay, this bird is called "Picaflor garganta blanca". "Picaflor" is the generic Spanish name for hummingbird and means something like "flower pincher". I think that name is quite apt. Although the necessary energy for flying is obtained mostly from nectar, they do in fact eat other food like small insects to obtain the necessary proteins. 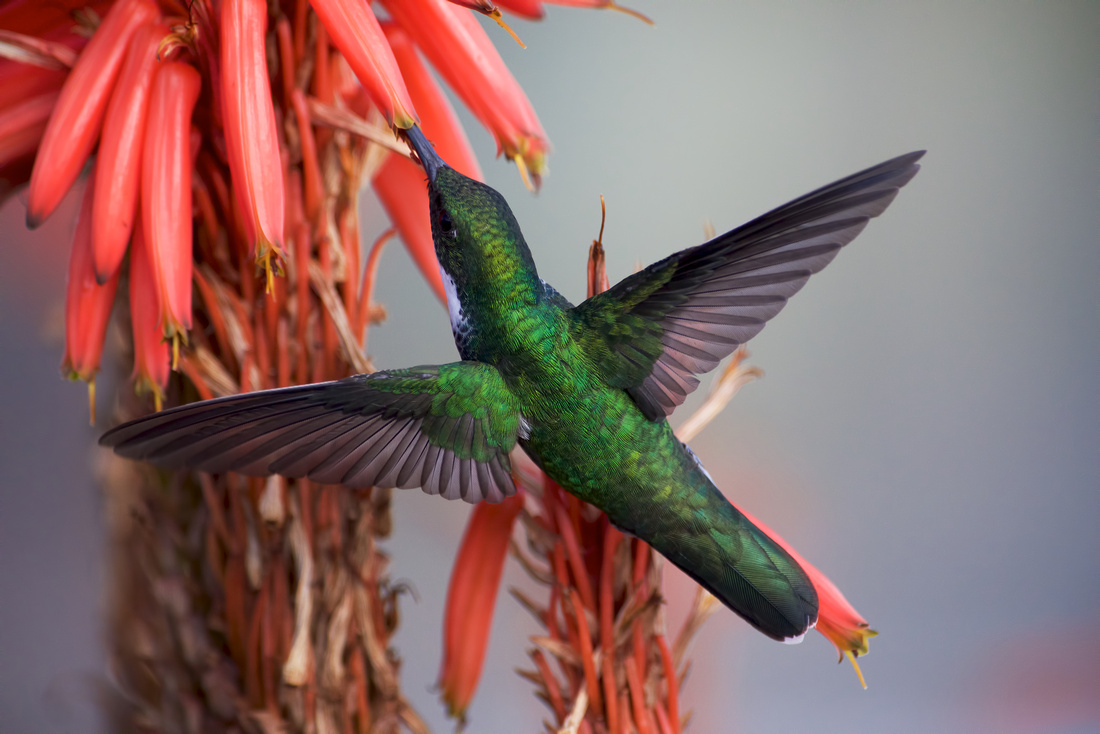 Hummingbirds belong to the family trochilidae, which only exist natively in the Americas. Being amongst the smalles of birds, they are capable of hovering with incredible precision in front of the flowers from which they suck their nectar, their wings beating around 70-200 times per second. To sustain the incredible amount of energy needed to be able to do this, their metabolism is fast. Very fast. In fact, they have the highest metabolism of any homeothermic animal. Their metabolism is in fact so fast, that they would die from starvation if they would sleep like other animals do. To conserve energy, hummingbirds go into a special state called torpor when they sleep. This is a state similar to hibernation, where their metabolic rate drops to around 1/15th of their normal rate. Although I couldn't find metabolic information specific to the white-throated hummingbird, measurements in other species have measured heart rates of up to about 1.250 beats per minute (!) with breathing rates of about 250 per minute, even in rest! So even when in torpor, they have a heart rate higher than a human being in rest. They still lose about 10% of weight per night! These birds don't have any risk of becoming obese. 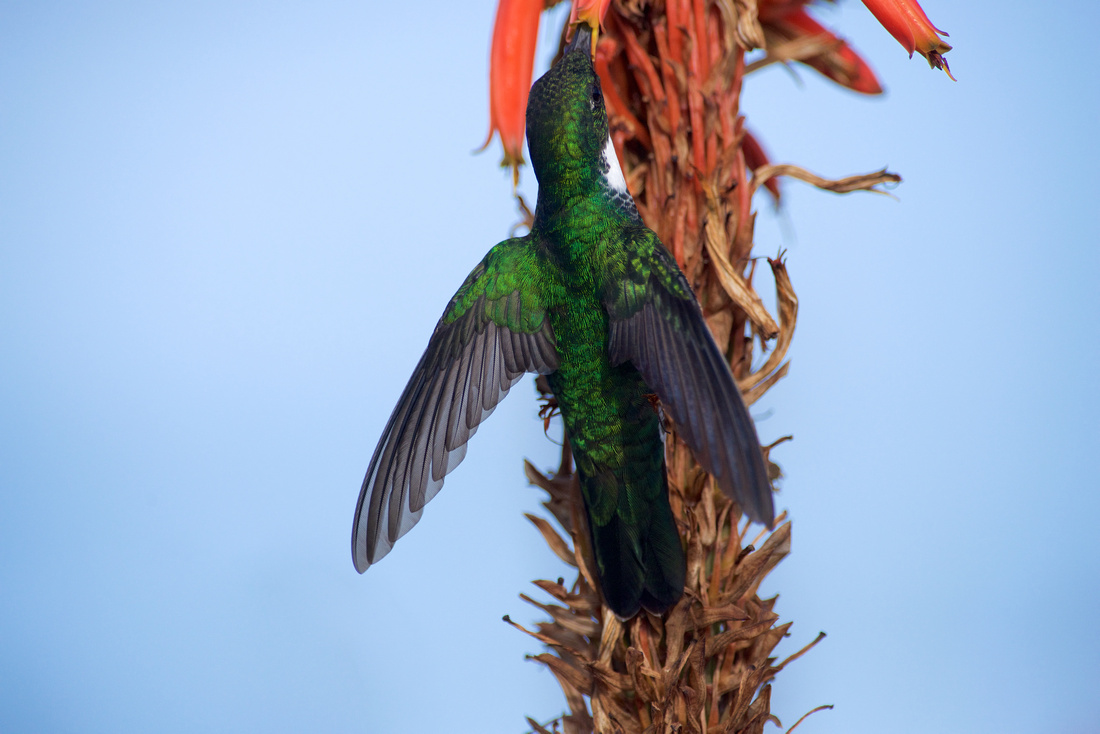 The wings of the white-throated hummingbird, and in fact all hummingbirds birds, are true pieces of art. Small, light and strong. A hummingbird's wings are unlike any other wings found in birds. Hummingbirds can do things no other bird can do. Apart from the hovering, they can fly forwards, backwards, sidewards en even upside down for a short while! They are true acrobats. The reason a hummingbird is capable of these remarkable feats is in their special anatomy. Unlike other birds where the shoulder is a normal joint, the shoulder of a hummingbird is a ball and socket joint that allows them to rotate their wings. They don't "flap" their wings as other birds do: they rotate them. When flying, their wings move in an oval pattern, and when when hovering they move in an "8" pattern, or "∞" if you will. 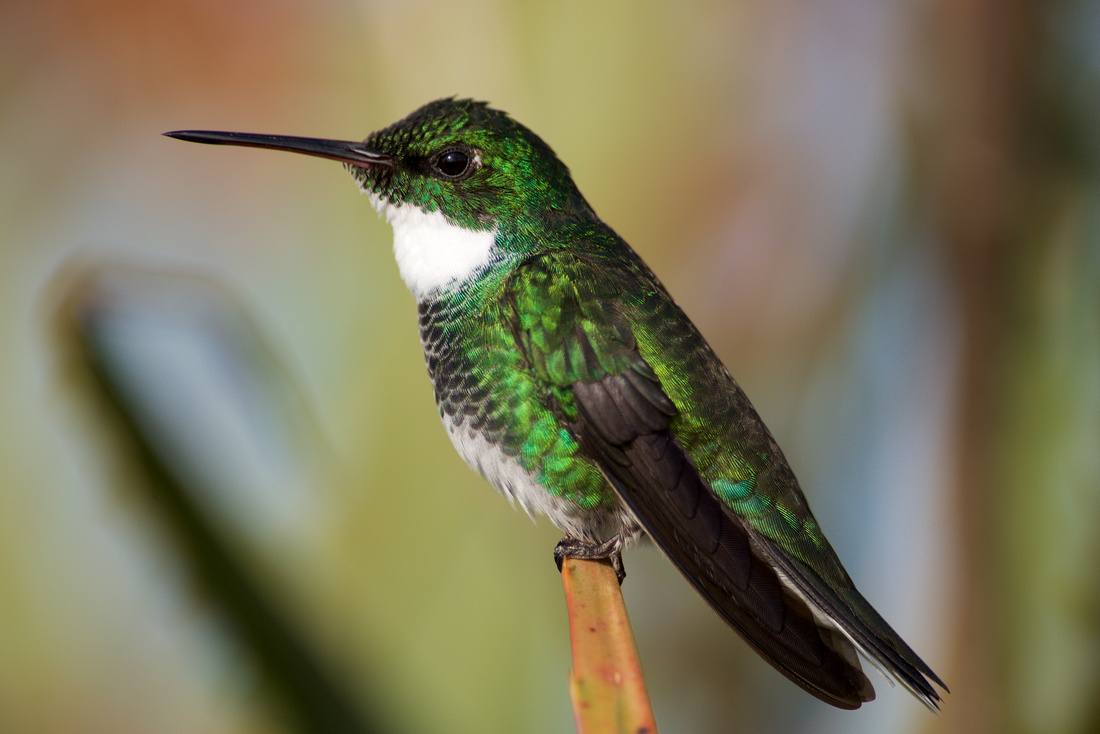 These little birds can be seen everywhere in Uruguay. It defends its territory quite aggressively and can often be seen chasing hummingbirds of the same or other species. 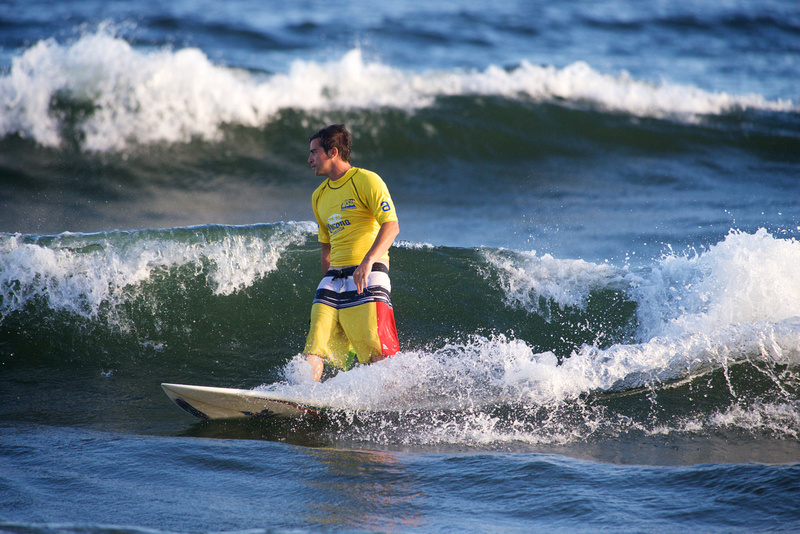 On Friday January 16th, the finals of the Copa Corona 2015 were held at Montoya Beach in La Barra, Uruguay. La Barra is a quaint little village near Punta del Este. Although the waves were not the best, it was still a nice spectacle. The beach was packed with people enjoying the sun, water and of course, the action that was played out in front of their eyes.

I saw the following finals: 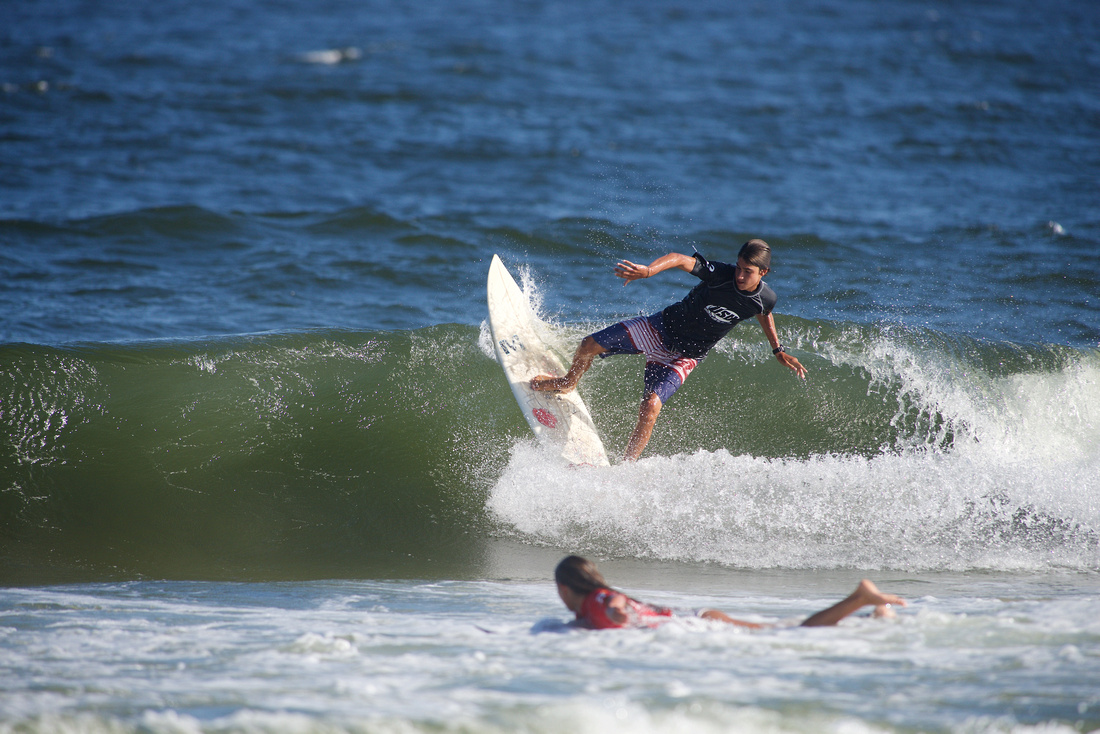 The first final I saw was the sub 16 final. Winner here was Tomas Migues, who showed some impressive moves. Interestingly, there was a girl in this final as well: Delfina Morosini. Only 14 years old, she is being hailed as Uruguay's best female surfer. She landed the 3rd position in this group. In the photo above, Tomás is riding the wave while Delfina is watching him from her surf board. The number 2 position went to Agustín Seanotta. See here for more photos. 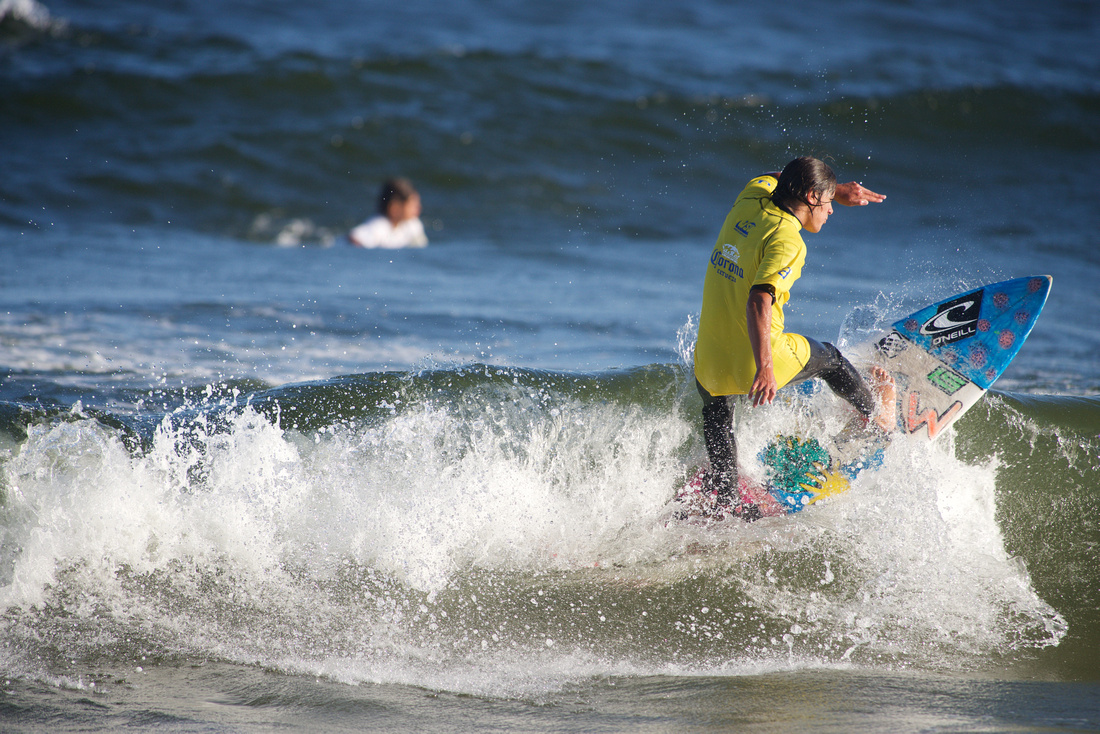 The winner of the group with surfers of 19 years or younger was won by Santiago Medeiro, in the photo above. Second place went to Francisco Morosini, the brother of Delfina Morosini. Surfing runs in the family, it seems! Third place went to Nahuel Cardona. See here for more photos. 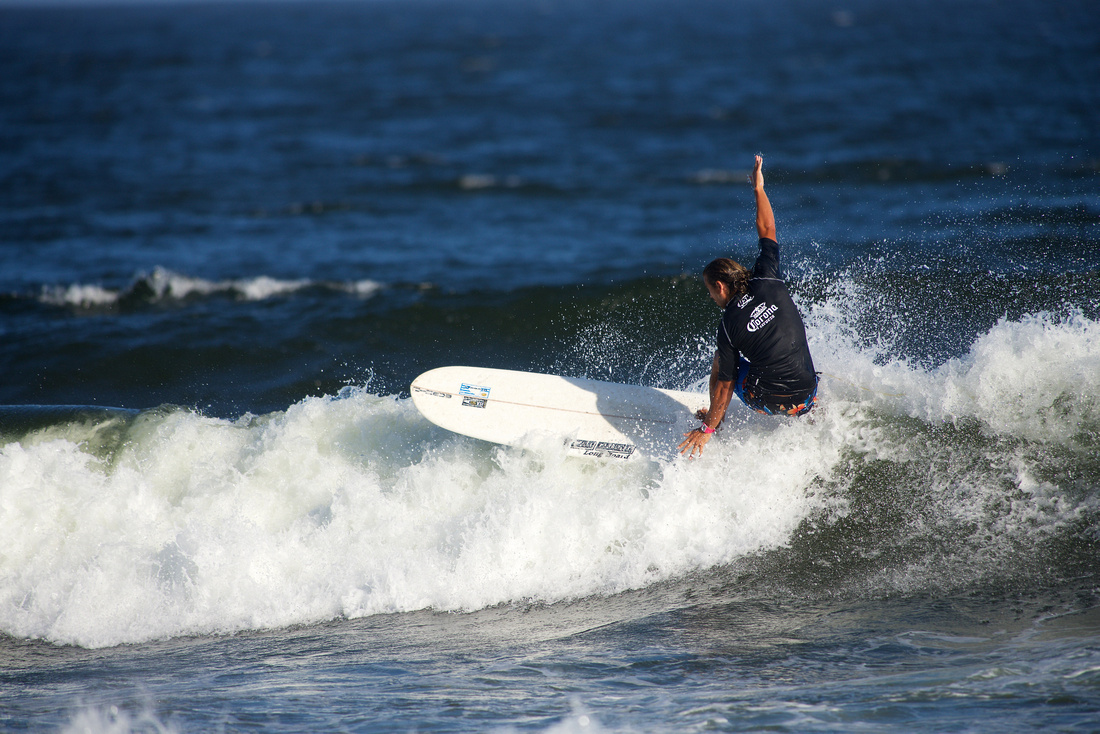 The longboard finals were won by Juan Malek, who can be seen in the photo above. Second and third place went to Ignacio Pignataro and Julian Schwiezer, respectively. See here for more photos. 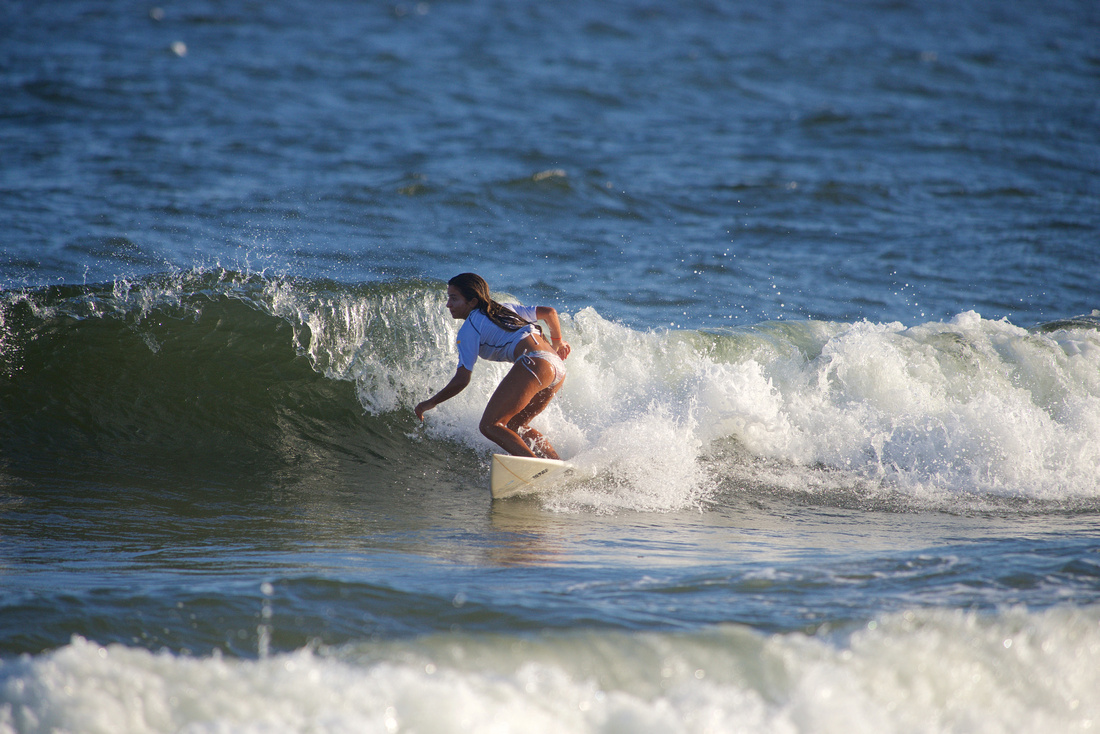 The finals for women was won by - not surprisingly - Delfina Morosini, who is shown in the white lycra she wore in this round in the photo above. The second place went to Maite de Alava and the third place to Camila Meana. See here for more photos. 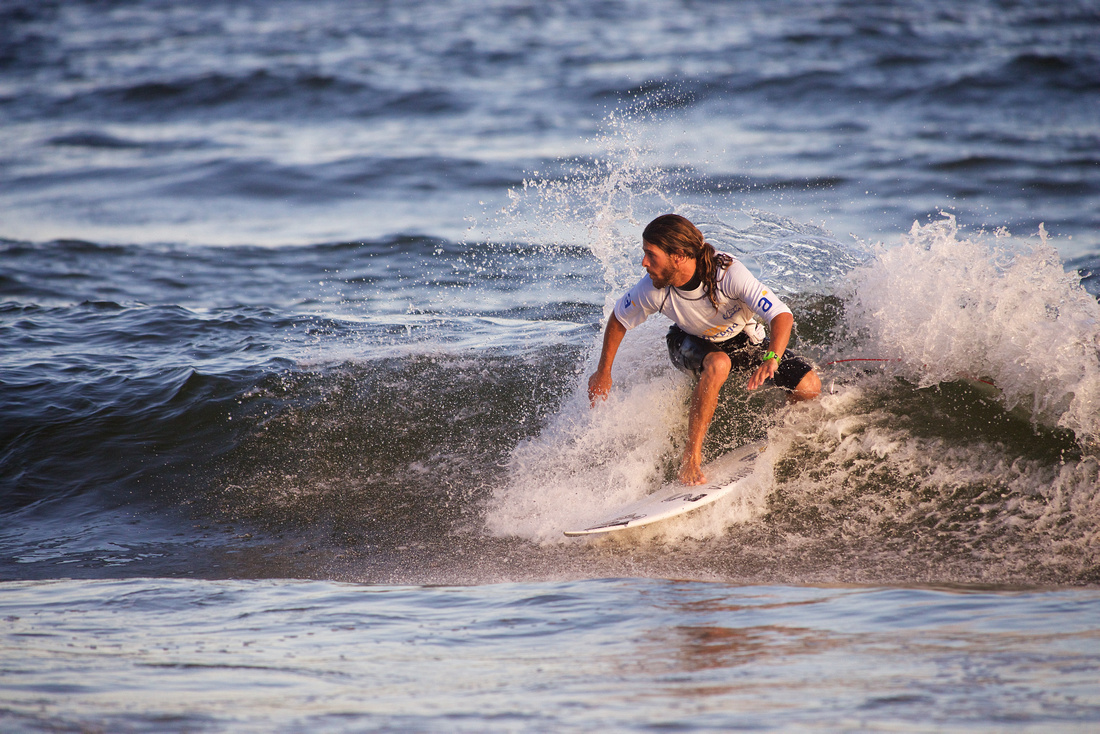 The final of the finals was the "open" round. Here the best surfers or Uruguay competed. Uruguayan champion Sebastián Olarte (see photo above) won the first price, followed by Lucas Madrid in his black lycra. The third place went to Julién Pérez in his yellow lycra. Francisco Morosini, whom we already saw in 2nd place in the sub 19 class, won the 4th price. See here for more photos. 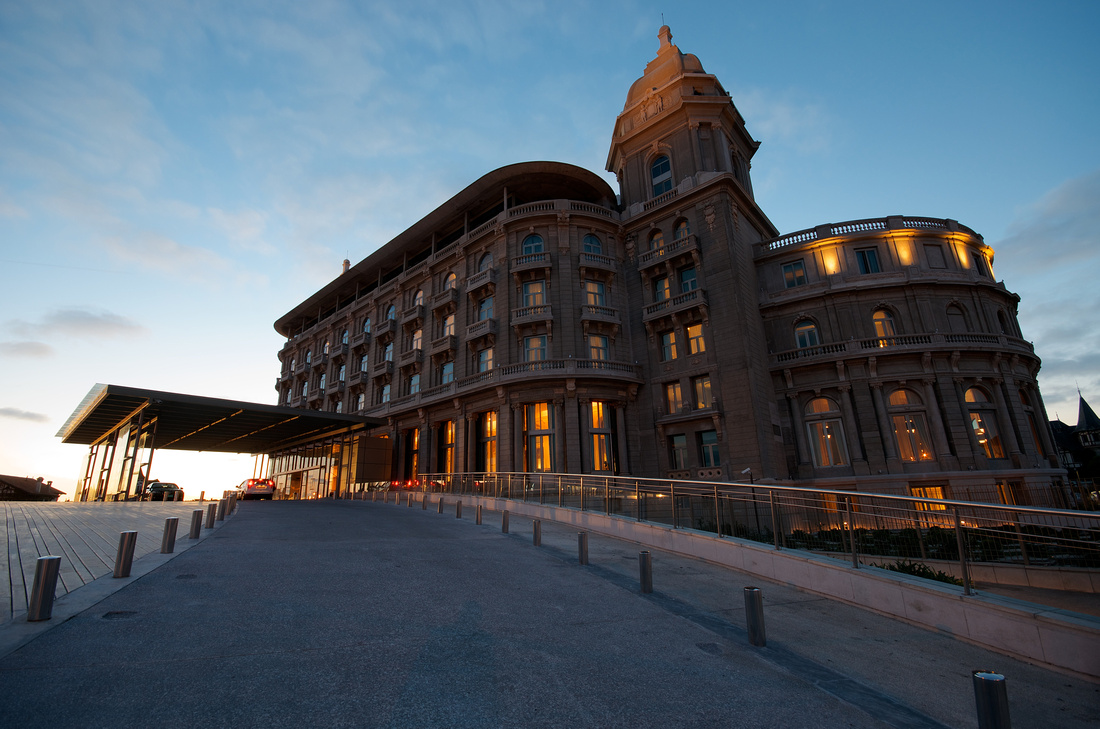 Hotel Carrasco is a historical building on the rambla (coastal road) of Montevideo, Uruguay. The name Carrasco refers to the neighbourhood it is built in. The building is from the beginning of the 20th century, and has recently been restored. The photos in this article are from April 2013, after the restoration was completed. 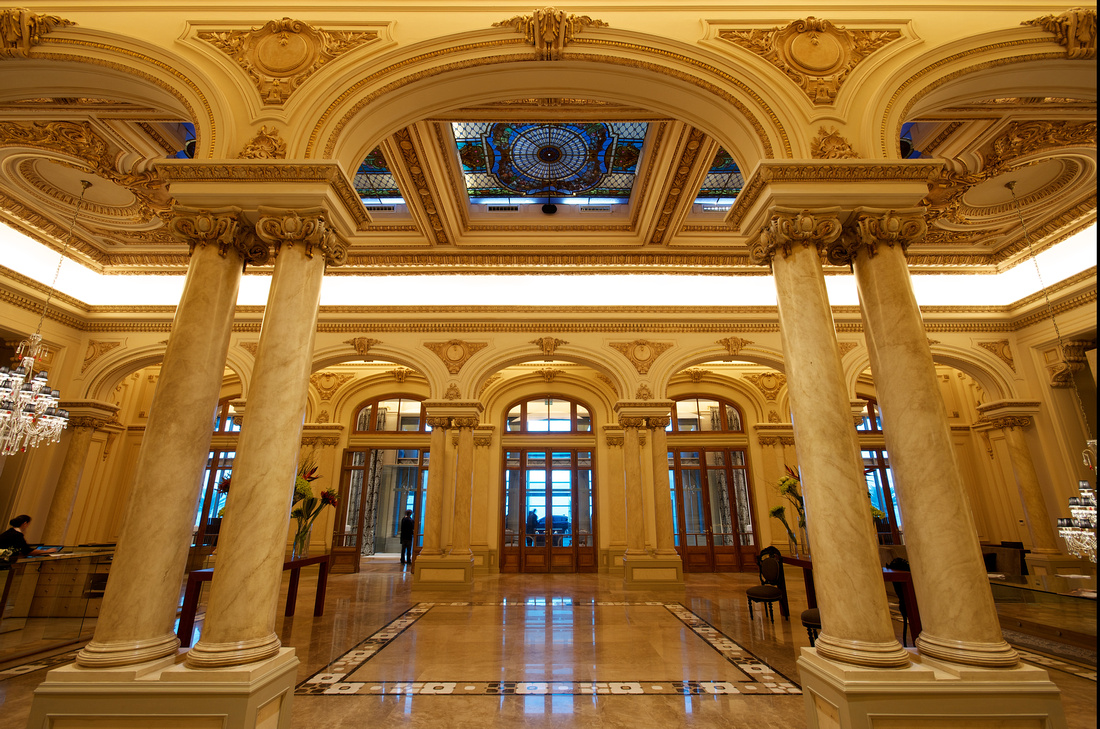 It was built by Alfredo Arocena, who was the main owner of the land in this area since 1907. In 1912 he created the Sociedad Anónima Balneario Carrasco, a company dedicated to convert the zone of Carrasco into a beach resort. One of the first activities of that company was the start of the construction of the original building, which also started in 1912. The hotel was designed by the French architects Jacques Dunant and Gastón Louis Mallet. After 9 years, and being interrupted by the World War I from 1914 until 1918, the building was inaugurated in 1921. 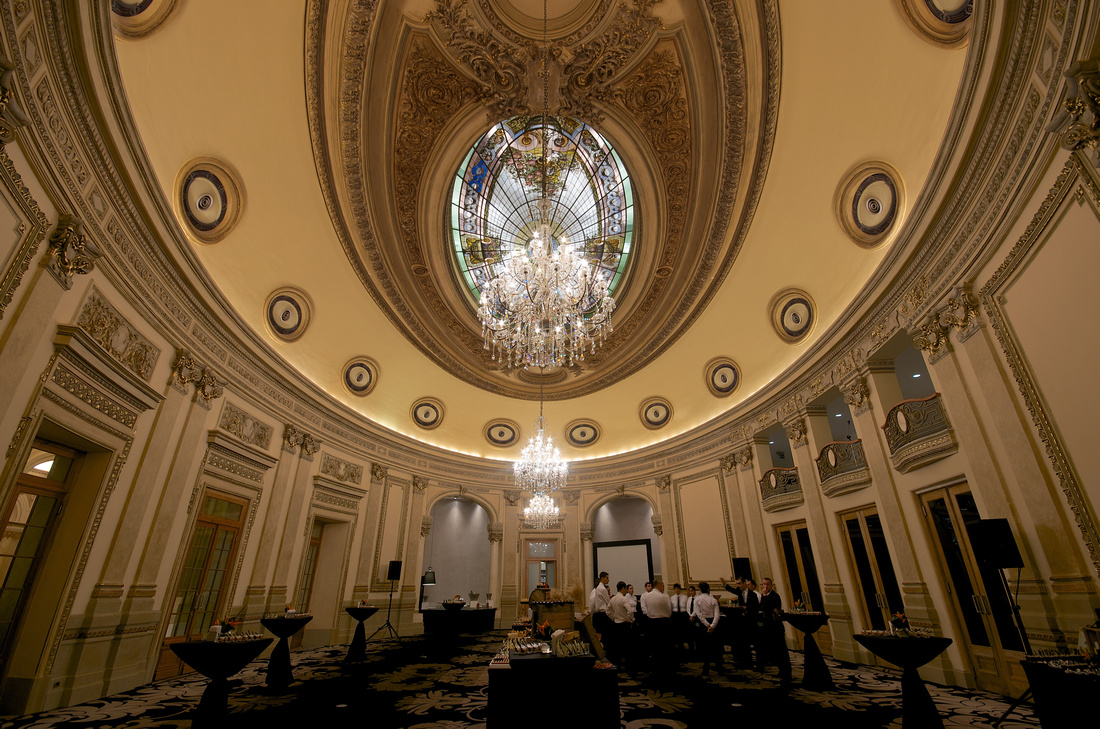 Over time, the hotel started to lose popularity. The facilities couldn't live up to the expectations of more modern times, and the building started to deteriorate. Eventually it was left abandoned. In 1975, the building became a national monument.

In 2009, Carrasco Nobile S.A. won the bid to carry out renovations on the hotel. In March 2013, the building that was declared a national monument in 1975, opened its doors to the public again. It now has a casino, which I haven't visited myself. I'm personally not too fond of the modern additions in front of the hotel (the glass entrance and the modern staircase), but the majority of the building and the inside of the hotel is absolutely stunning. 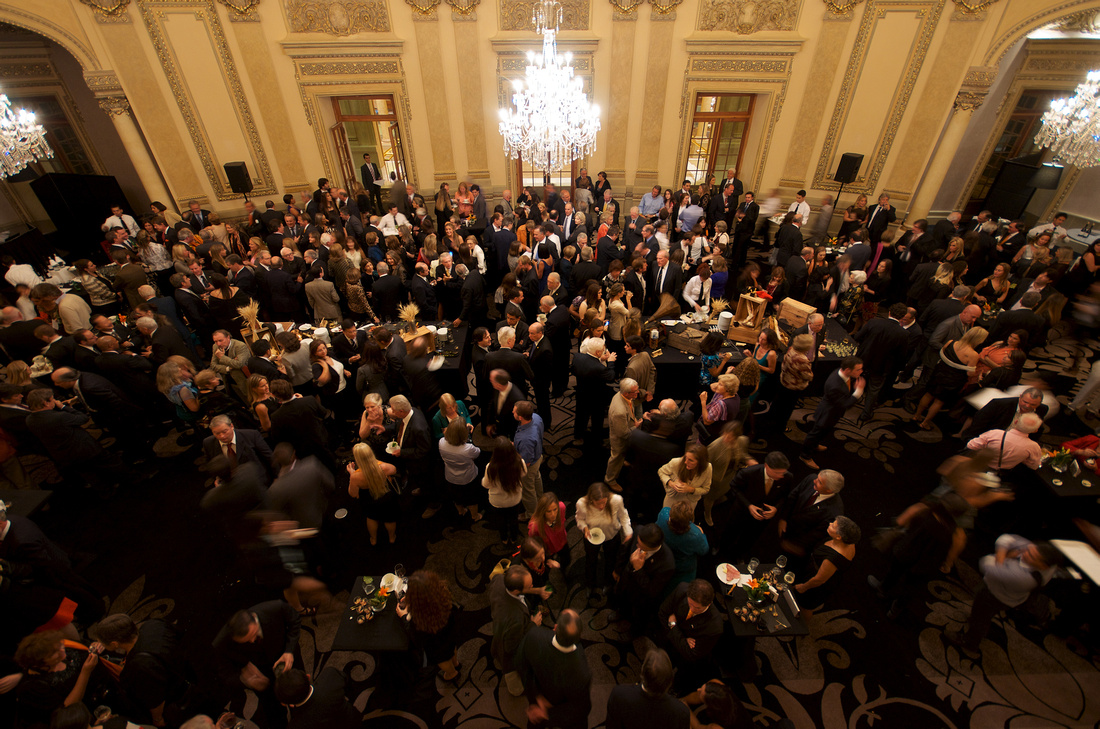 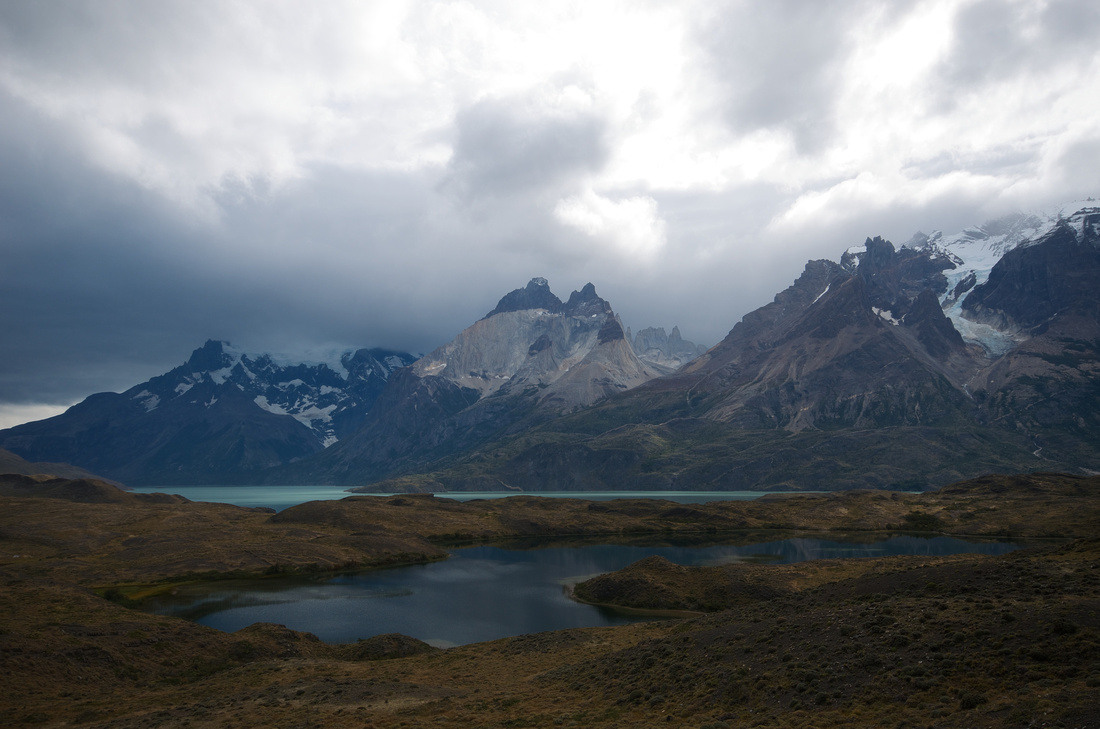 Torres del Paine is a national park encompassing mountains, glaciers, lakes, and rivers in southern Chilean Patagonia. It was declared National Park in 1959, and UNESCO declared it Biosphere Reservation in 1978. It has a total surface of 242.242 hectares. The park is most famous for the mountain peaks it is named for, the Torres del Paine ("Towers of Paine"). The Torres del Paine are the three lighter grey peaks to the right of the centre of this photo. The Cuernos del Paine ("Horns of Paine") is the light grey mountain on the fold, with the black mountain tops. The mountain at the right is Cerro Paine Grande, and it is the highest mountain here. Its height is said to extend 3.050 metres above sea level, although apparently that is disputed; some observations apparently lead to measurements of 2.750 metres. 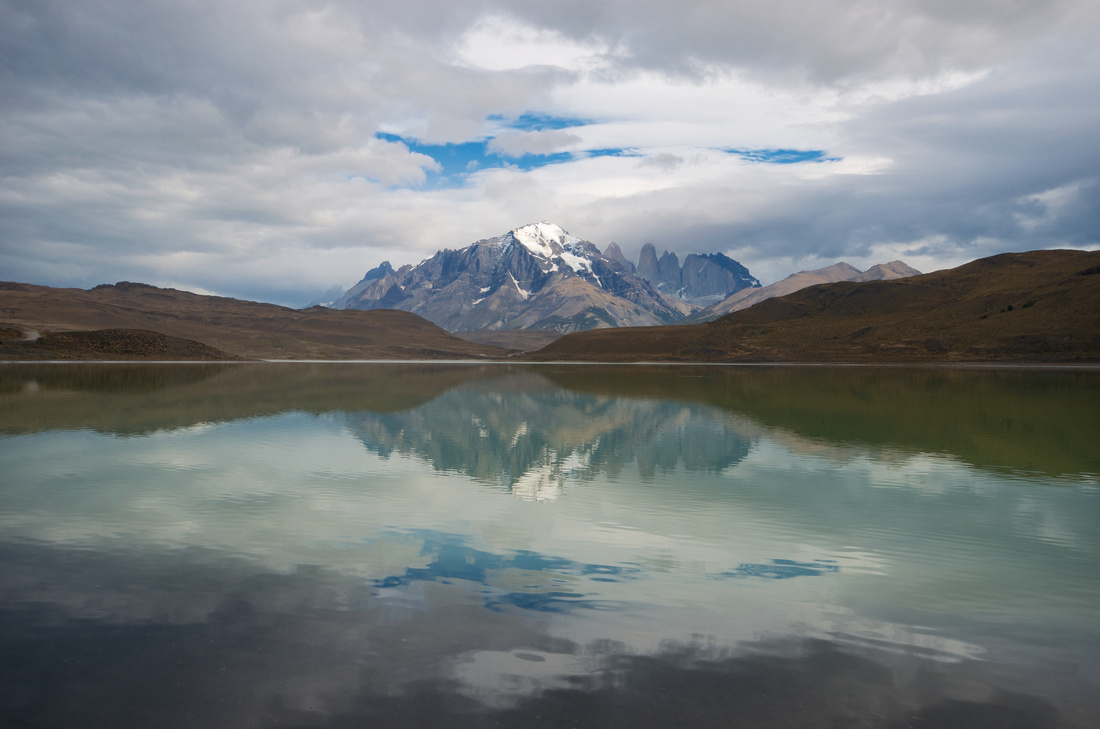 The park offers various beautiful spots. One of those spots is Laguna Amarga ("Bitter Lake"). This lake has a special colour, due to the stromatolites living in the lake. In the photo above you can see the lake, with the Torres del Paine in the background (they are the grey peaks to the right of the snowy mountain on the left). 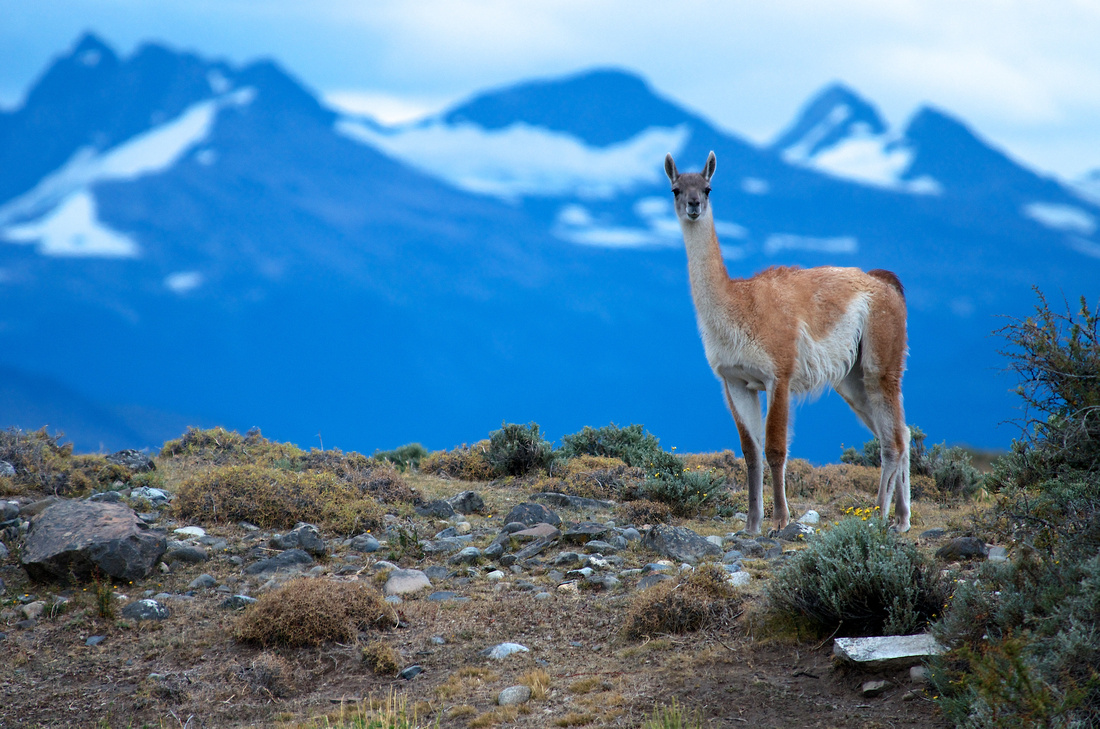 Within the park (and around it), you see lots of Guanacos (Lama guanicoe). It is a camelid native to the arid, mountainous regions of South America. It stands between 1 and 1,2 metres and weighs about 90 kilograms. 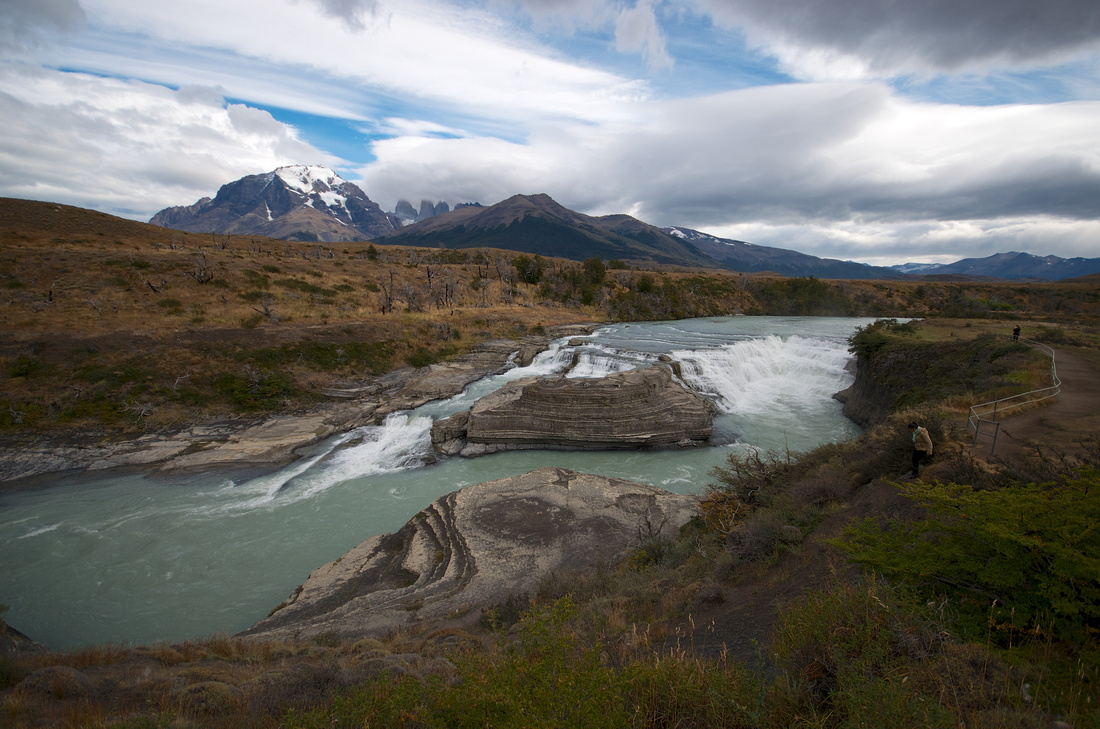 The Cascada del Río Paine (cascades of the river Paine) are beautiful cascades in the River Paine. The colour of the water is caused by glacier flour, which are silt-sized particles of rock. Because the material is very small, it becomes suspended in river water making the water appear cloudy, which is sometimes known as glacial milk. 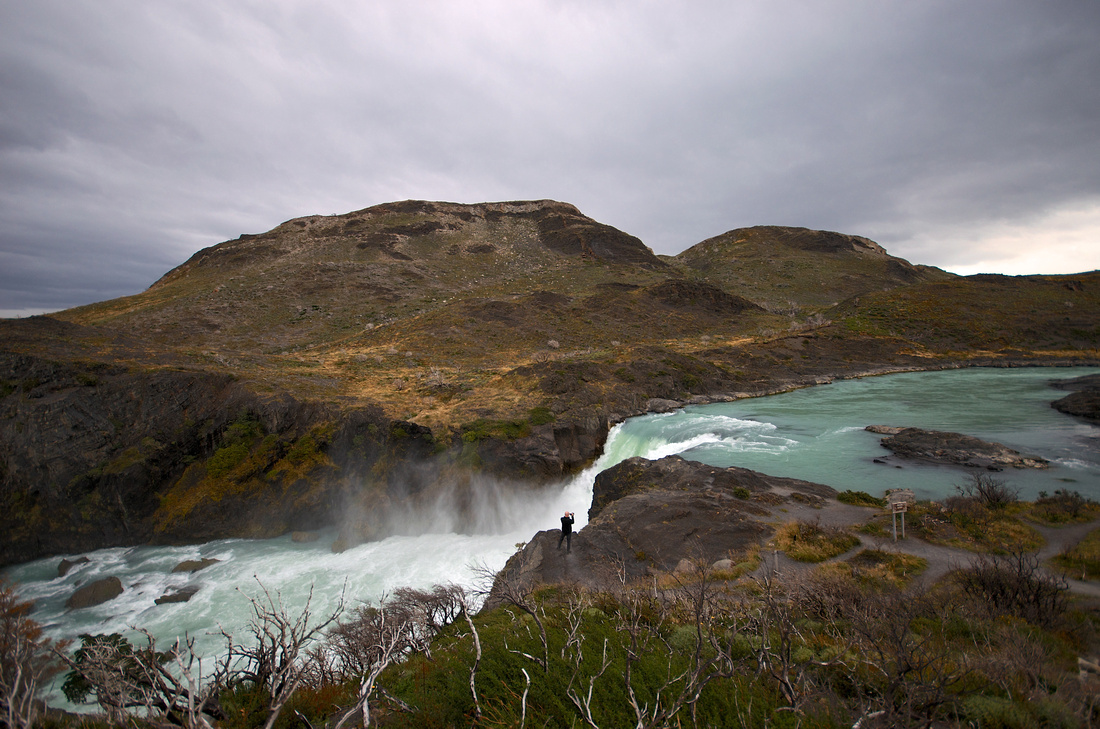 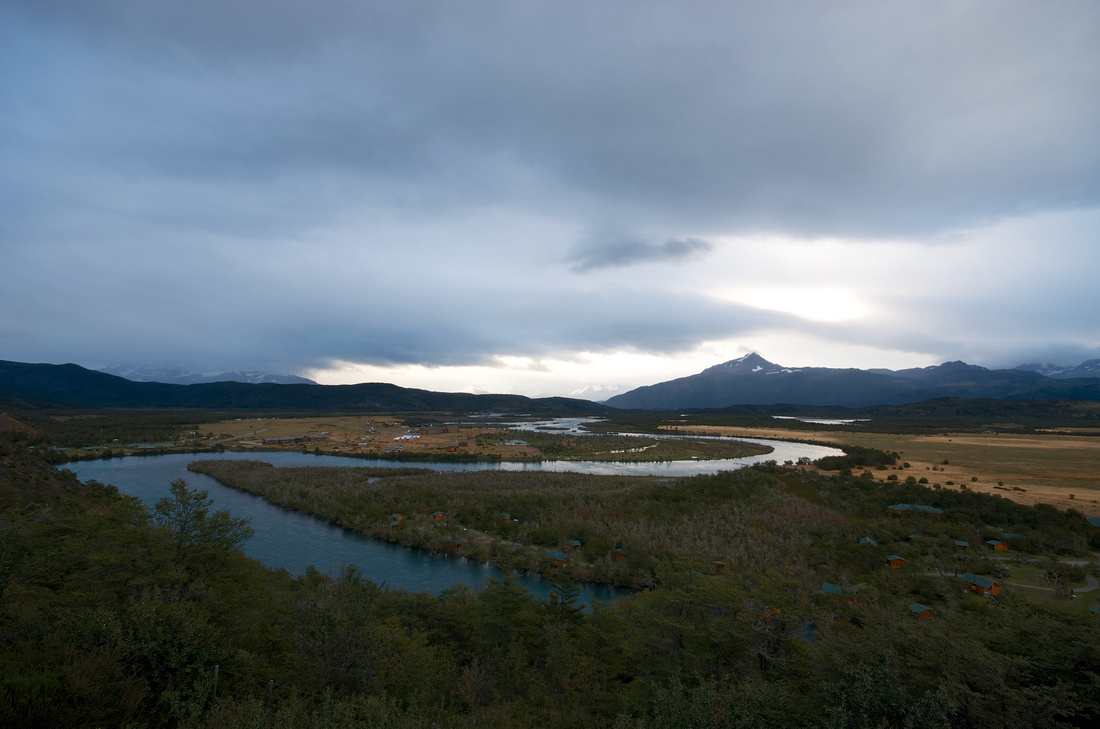 Spending only one day within the park left us wanting for more. There are so many beautiful spots, like the Río Serrano, which meanders through the countryside as can be seen in the photo above. We had to leave out quite a few interesting spots, such as the Grey Glacier. I hope to return here some day to explore the rest of the park.