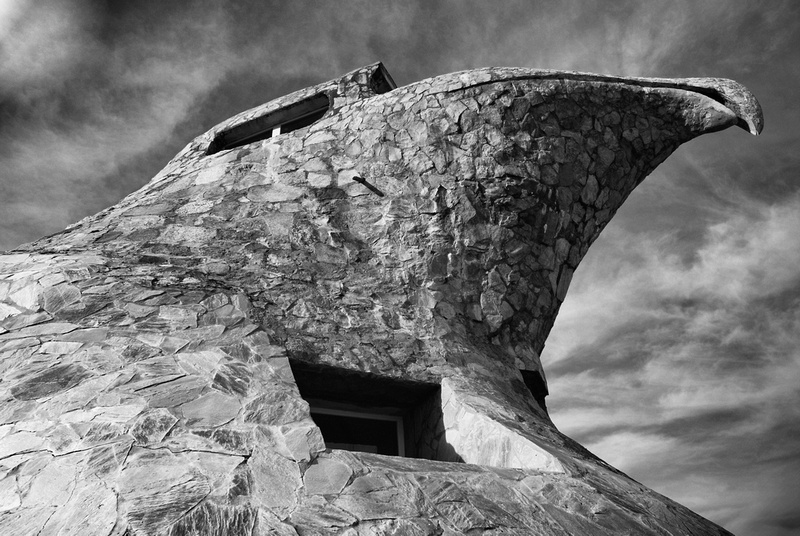 El Aguila (The Eagle), at a distance of 3 kilometers from the city Atlántida in the province called Canelones, is one of the more famous buildings you can find at the coast of the Rio de la Plata (River Plate) and of the most well-known landmarks of the resort town Atlántida, near Montevideo.

"El aguila", or "La Quimera" as it was called originally ("the figment"), was part of a bigger structure. Most of this structure has disappeared over time due to erosion. It owns its existence to two men: the millionaire Natalio Michelizzi (an Italian who lived in Buenos Aires) and the Uruguayan constructor Juan Torres. On August 1st of 1945, Michelizzi, who owned a house at the beach, asked Torres to build a small chapel for him of 2 by 2 meters, where he wanted to place a figurine of the Virgin Maria.

To make sure the room wouldn’t end up too small, Torres decided to make the room larger (4 by 4). When Michelizzi saw the chapel-to-be, he decided to abandon the plan to make it a chapel and to dedicate this place to read, paint and to receive and have drinks with his friends.

Over time, a sleeping room, bathroom and kitchen was added. Torres, without any architectural plan and on a whim, imagined and created the head of the eagle. The eagle was covered with stones from the region to resemble the feathers. Michelizzi liked it so much that he asked Torres to enlarge the structure at the bottom by adding a new part in the shape of a boat. The floor of the eagle was transformed into a roof terrace on top of the boat, and inside was a bar. The prow ended in two concrete “needles” that resembled the open mouth of a dolphin.

Michelizzi died in 1953 at the age of 54, and shortly after the gardens and surrounding structures started to suffer from lack of maintenance. With time the boat part of the structure was destroyed by the Rio de la Plata. Due to the distinct shape of the eagle's head, legends started spreading. It would have served as an observatory for nazi spies, a smugglers headquarter and it would even channel "cosmic energy". Nowadays only the original structure exists, and it is open to the public all year round.