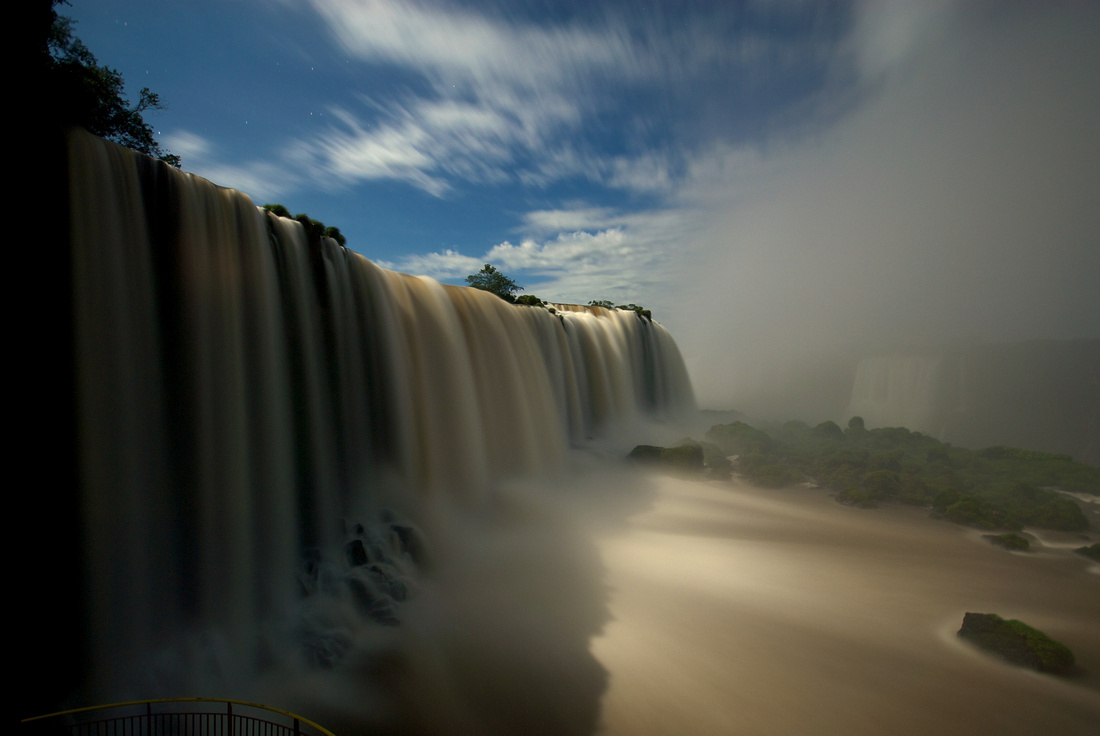 While I originally planned for this site to include photos of Uruguay only, after my recent travel to the Iguazú falls I decided to also register southamericaphoto.com, redirect it to this site and just include a blog post here as well. Why limit yourself? ;-) If you haven't heard about the Iguazú falls, this blog post is for you. If you already know of it, I hope the story and the pictures will bring back nice memories.

The photo above shows waterfalls as seen at the Brazilian side during full moon. The picture below shows a moon rainbow during that same night. Yes, you read that correctly. A moon rainbow. The  photos you see here have exposure times of about 1 minute to capture sufficient light, hence the foamy look of the water. 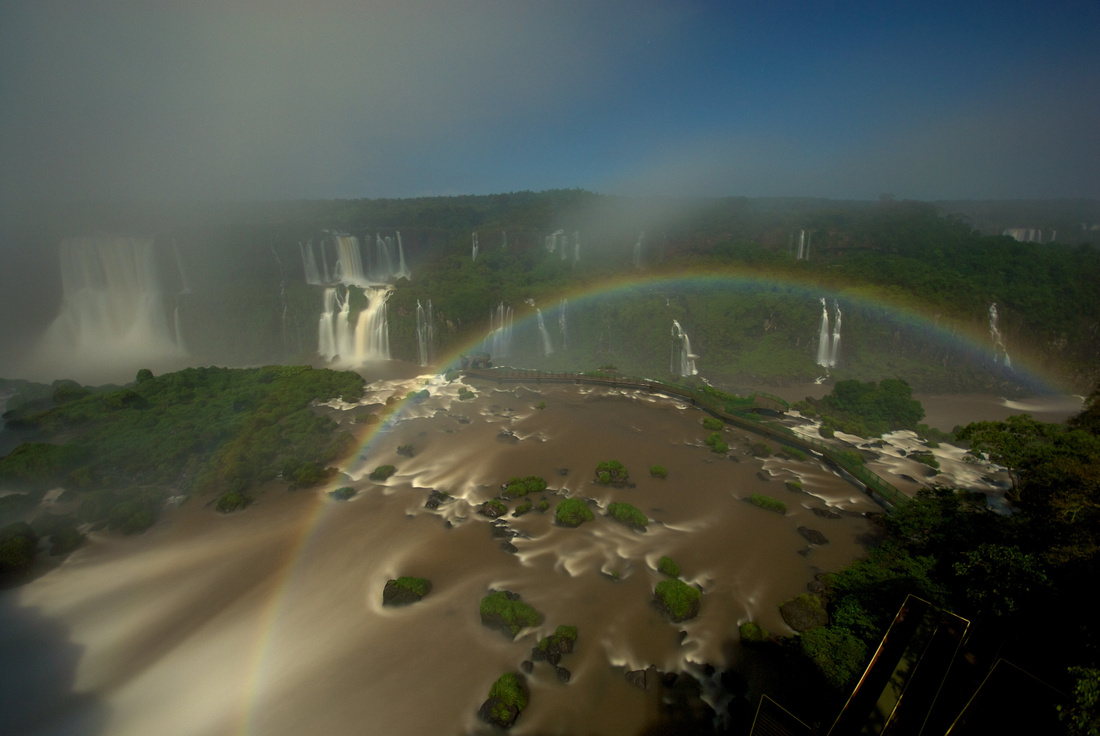 Moon rainbow at the Iguazú waterfalls

The Iguazú falls are located on the border of the Argentinian province of Misiones and the Brazilian state of Paraná. The river separates both countries here. The part before the waterfall is called the "higher Iguazú", and the part below it, not surprisingly, the "lower Iguazú". The falls are located in national parks on both sides. The Argentinian side was declared a national park in 1934, and the Brazilian side in 1939. In 1986 the UNESCO listed the Iguaçú National Park as Natural Heritage of Humanity. It now is one of the largest forest preservation areas in South America, with a staggering variety of wildlife. 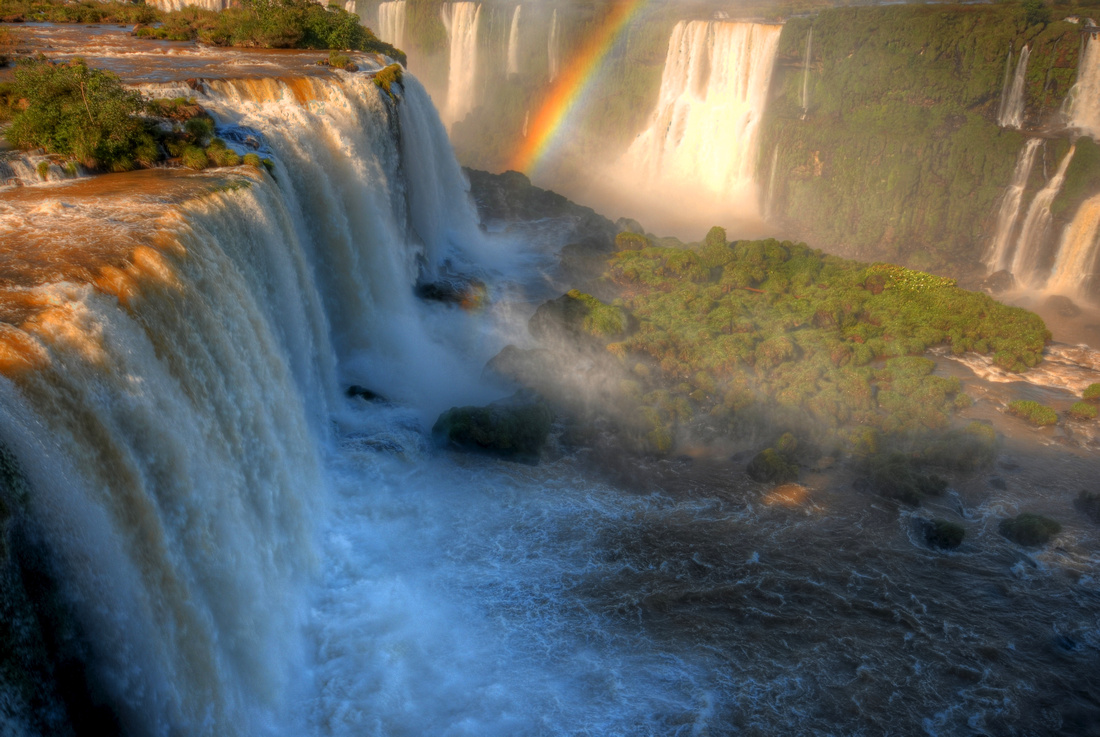 The name "Iguazu" comes from the Guaraní words y, meaning "water", and ûasú, meaning "big". Legend has it that the god M'Boi planned to marry a beautiful woman named Naipí ("marrying" meaning here she would be sacrificed by the Guaraní and thrown into the river). However, Naipí fled with her mortal lover, a warrior called Tarobá, in a canoe. In a rage the god sliced the river, creating the waterfalls and condemning the lovers to an eternal fall. Supposedly Naipí is now a rock at the bottom of the falls, so she will never be able to leave M'Boi's side.

Depending on the amount of water flowing, the number of waterfalls varies between 150 and 300, some small and some very big. The height of the falls varies between 60 and 82 meters. The normal flow rate is about 1,5 million liters per second, which is already a mind-boggling number. However, in 1992 the flow increased to 29 times that rate (!), completely destroying the tourist infrastructure on the Argentinian side. The best known fall at the site can be found at the Argentinian side and is called "Garganta del Diablo" ("Devil's throat"). The Devil's Throat is U-shaped, 82-meter-high, 150-meter-wide, and 700-meter-long and is absolutely mind-blowing. It's possible to take a helicopter ride and see it from above, to better appreciate the immensity of it. 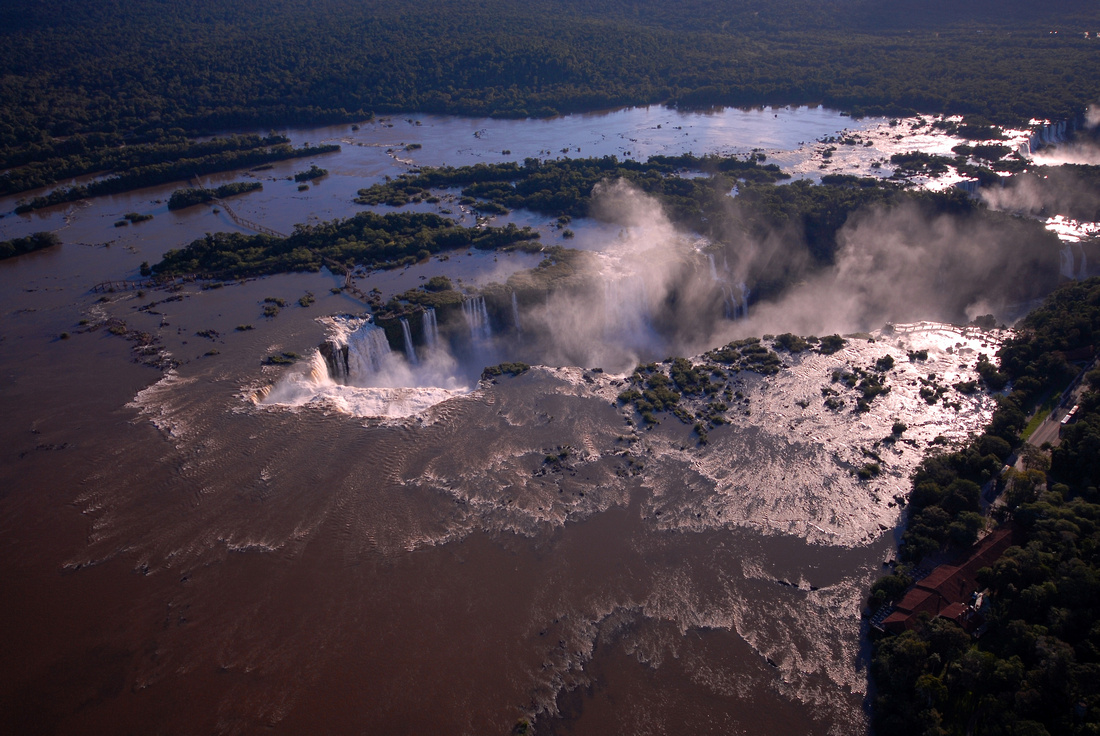 Garganta del diablo from the air

As you can see in the photo above, a ramp leads up to the falls, allowing you to be almost inside the Devil's throat. We were lucky enough to be the first ones to arrive there. Being there is difficult to describe. The sheer volume of water rushing by and disappearing in the vapors below during an 82 meter plunge is overwhelming, and makes one feel very insignificant. I love it when nature humbles you like that. 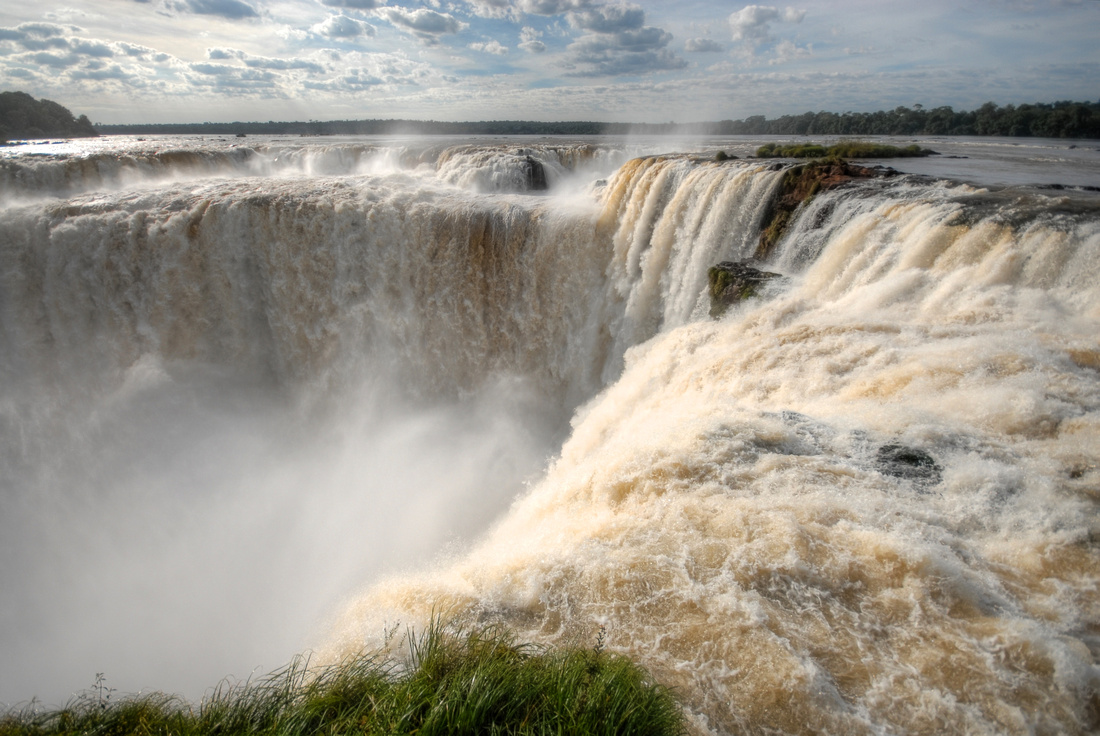 Apart from the Garganta del diablo, the Argentinian park has lots of other beautiful views to offer. There are two main tours one can walk: "el paseo superior" (the upper tour) and "el paseo inferior" (the lower tour). The photo below gives an impression of how many different waterfalls there are. In the lower left corner you can see a part of the "paseo inferior". 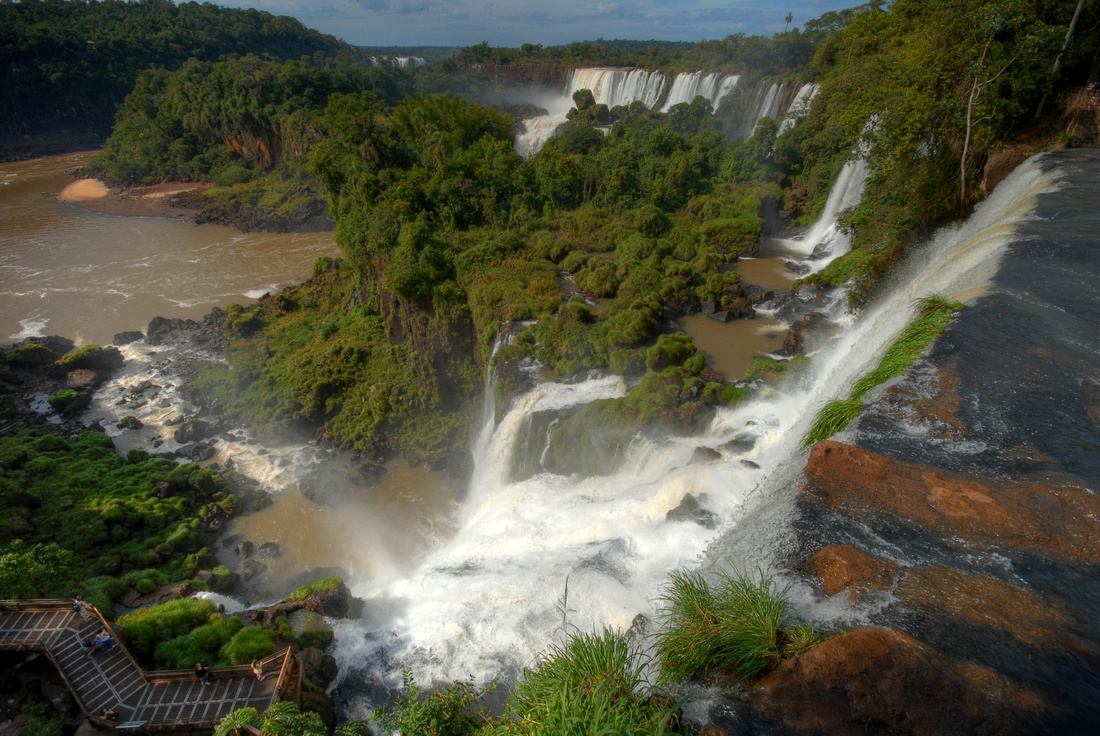 The waterfalls are not the only thing to enjoy in Iguazú National Park. Nature is abundant, and you can observe lots of different flora and fauna. The South American coati is famous and absolutely not shy. 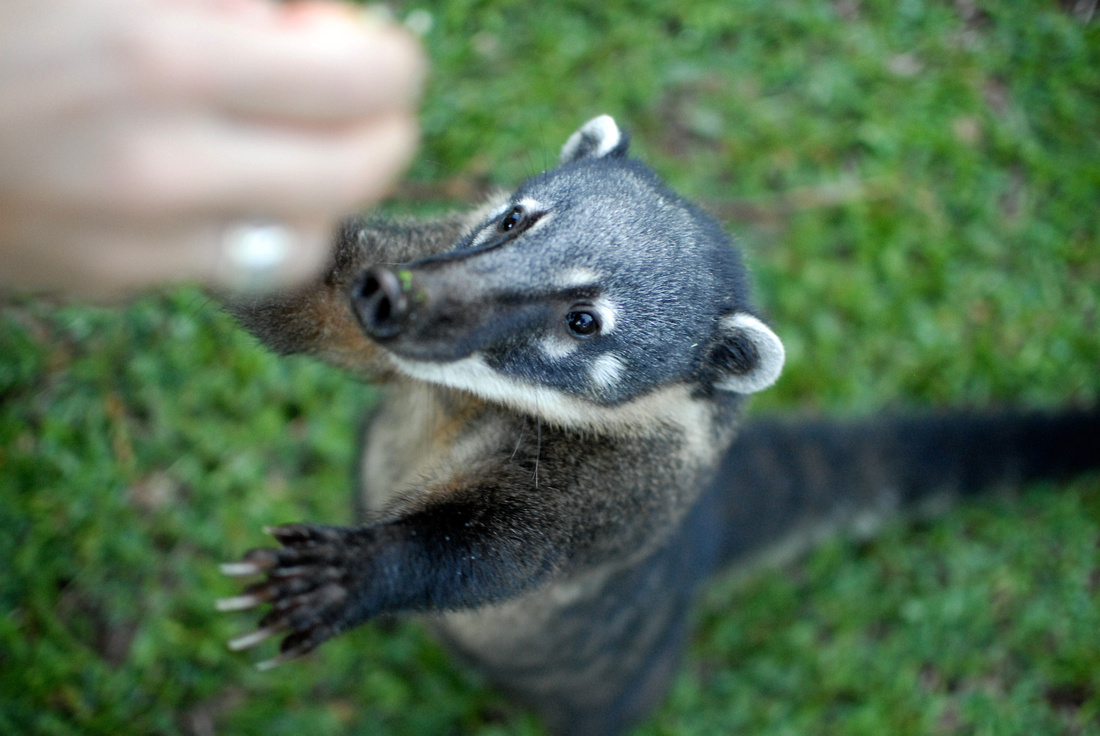 Since these are the subtropics, the birds you can find here are absolutely beautiful. A famous example of a bird you see here in abundance is the Toco Toucan (Ramphastos toco). As you can see below, the colors are absolutely stunning. Although they are supposedly poor flyers, I personally thought they actually looked very cool. They typically fly in pairs and to me it looked like a formation of fighter jets passing overhead. 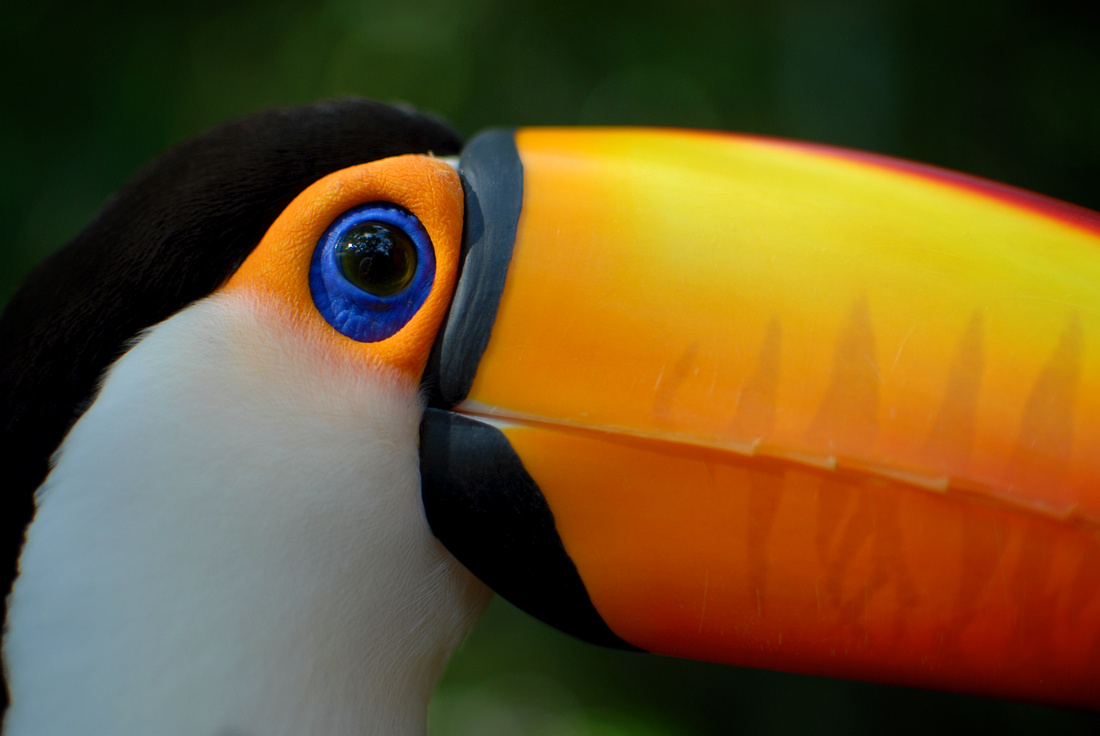 All in all Iguazú National Park is an incredible experience. Staying in an hotel in the park itself is unforgettable, giving you the hours outside the park's opening hours to enjoy all this beauty in peace and quiet.